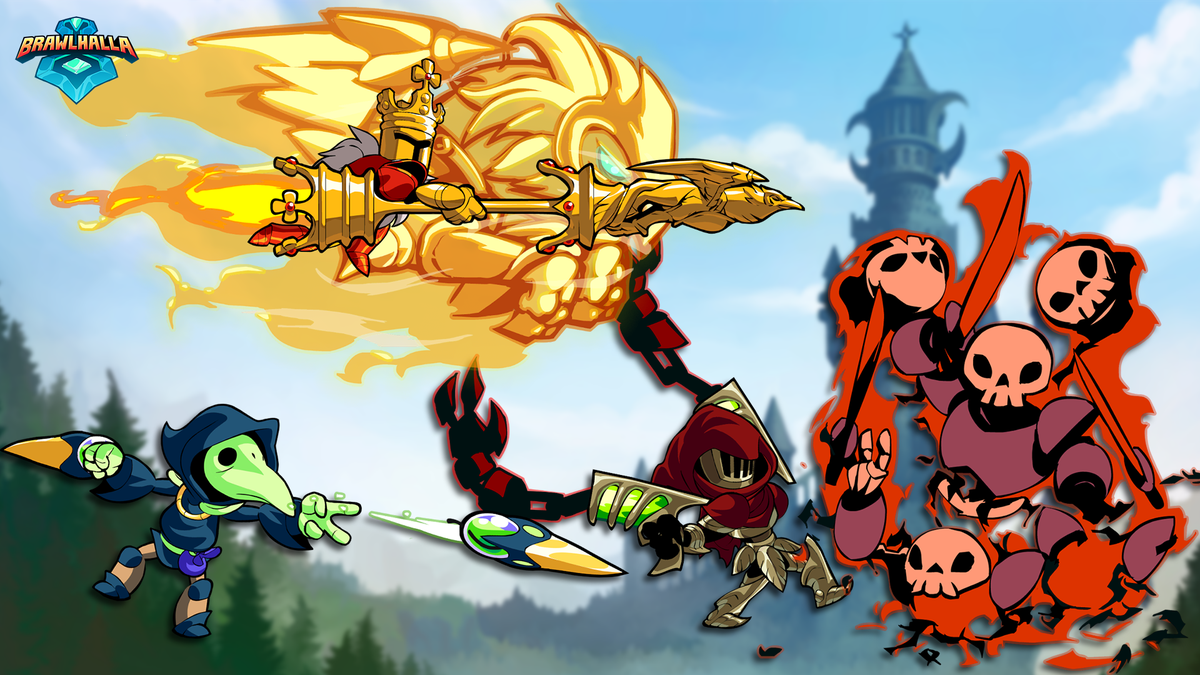 Brawlhalla is a highly popular fighting arcade game, it has a plethora of different characters with different kinds of play styles to learn and master. This is a long running game, and was acquired by Ubisoft a while ago; after which it has seen collaborations with so many different media outlets and film franchises, such as Kung Fu Panda, The Walking Dead, Tomb Raider, WWE, Adventure Time, Hellboy, Rayman, Ben 10 and even Shovel Knight. The game has gained a huge notoriety in the fighting game niche, with there being actual ESports tournaments arranged for it as well.

The gameplay is somewhat like Super Smash Bros, with the main goal being; knocking your opponent off the stage. Now, doing that might sound simple enough; but there’s actually a lot of technique to it. Which is what most Brawlhalla players choose to not focus on, and rather enjoy the game’s absurdness and just actual player engagement! What makes that engagement even more fun at times is that you can share your experiences with your friends! Yes, you can play Brawlhalla with your friends; you do not just have to play it alone! What’s that? You do not know how to add your friends? Well, let us tell you all the different ways that you can play Brawlhalla with your buddies!

How to add Friends in Brawlhalla:

Whenever you play a game of Brawlhalla, it always comes to an end. So, if you were playing in a duos match on your own, and really liked the way your team mate played then you can just add them! It’s very simple, all you have to do is wait for the match to end, and once it ends; press V and see a list of options show up. In these options there will also be the “Add Friend” button, which will add the player into your friends list.

Already have friends but don’t know how to add them in Brawlhalla? No worries, the easiest way to play Brawlhalla with your friends is to link your steam account with your Brawlhalla game directly. The game is available to play on Steam for literally $0; yep, it is completely free to play so you can just tell your friends to download it, it also has an exceptionally low overall file size. After you link your Steam account to your Brawlhalla, everyone in your Steam friends list that plays Brawlhalla will be available for you to invite to a duo or a custom match! It is quite literally that simple.

Another way is to simply join a clan, which will give you access to play with many different players that are also part of the same clan! If you are a limited user, then you cannot create your own clan; however if you are not limited then you can. Once you join a clan, you can just invite any of your friends to the same custom lobby as yourself, you can even queue with them in a ranked playlist if you want.

How to invite Friends to join your Lobby

Well, this part is extremely simple. All you have to do is to select the matchmaking playlist that you want to play in; there are different lobbies that you can invite your friends to play in, for example; Duo Partnering in Ranked or a Custom Game.

The most amount of friends you can invite is in a Custom game; so you just click on Custom Game and it shows up the stage and overall player count pick. The menu will have a code on the top right of it, you just pass that code to your friends and they will type that into the matchmaking circuit and will easily join your game! If someone else has made the lobby, then you can simply join them as well by going into “Custom” and pressing the “Join Room” button! It’s very simple, very straightforward.

This one is also very simple, but you can only play ranked with one additional friend and not more than that. The person you invite or join the Ranked game of, that will be your duo partner. It’s the same process, however you can either invite your friend to your party and then queue up for Ranked 2v2 through your friends list, on consoles that is by pressing the Touch Pad, and on PC it is by pressing TAB. You can also join a ranked game on your own, then pass the room code to your friend and invite them to play with you in the same match! If you want to join your friend’s room however, you will have to click on the “Join Room” button and enter the code that your friend will give to you and then you can join their match! Again, it is very straightforward and simple to join your friends.

That’s all the relevant information that there is on how to add friends in Brawlhalla, as well as how to invite and join them in either ranked or custom games! Remember, you can only play Ranked as a duo, while Custom Games can be played with a total of four people, 2 on each team. If you found this article useful, then please read our other guides!