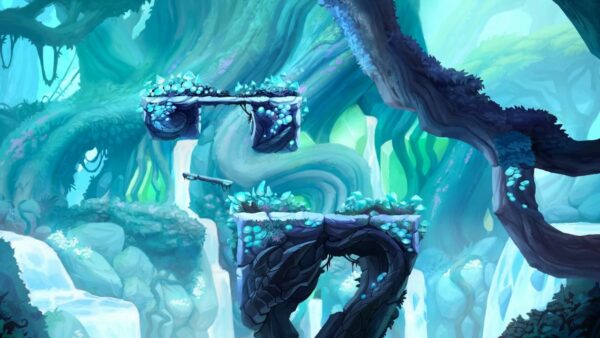 Brawlhalla has turned into a massive game over time with countless updates and additional content since its release, and with 51 unique characters, it’s only natural that it would have a lot of different maps to play in as well. Originally titled ‘Realms’, the maps of the game are 22 in total, and the number increases to 38 if you count all the variations to existing maps (which vary between small, medium, and so on).

Since the game has so many different characters, it’s only natural that it’s difficult to balance the maps for them and a few maps end up granting an advantage to a few of the legends over the others. That’s why if you’re playing serious matches against other players, you need to know what maps to play in and which ones to avoid.

That’s why we’ve created a list of the top 10 best maps in Brawlhalla that are well-balanced for all characters and beloved by the community! So, let’s get right into it.

A map called Brawlhaven in a game called Brawlhalla is bound to be developed with great consideration in mind. The map comes in two variations and both of them are fun to play in – but it’s the small version that truly shines. It features a perfect even ground that provides enough space for a smaller match and is perfect for a 1v1 match – and sometimes that simplicity is exactly what you need in a serious match to test your capabilities.

Besides, it looks really beautiful too.

Mammoth Fortress is another great map that thrives on simplicity and shares its name with something directly related to the game – the Mammoth currency. It’s almost impossible to tell the difference between the larger and smaller versions of the map, but if you pay close attention the difference is essentially the height you are allowed to use your returning-from-the-edge gameplay on.

We prefer the smaller version in this case, as it provides a more refined experience and allows the characters to come back just fine but not to an annoying extent.

Shipwreck Falls is a very interesting map and has a very specific theme to go with. It features a jungle-like environment full of water and a wrecked ship that you fight on a part of. The map is pretty simple and even on the ground-level, but features sliding edges to make the returning aspect of gameplay a bit trickier.

There are no platforms, so it allows for a more consistent battle and it has enough space for matches with a couple of people at the same time.

Demon Island is one of the most aesthetically pleasing maps in the game and has a nice sci-fi yet mythical feel to it. The ground is very straightforward to fight on and it has enough space to be able to carry a couple of players in at the same time, with no platforms at all.

The edges on the other hand are mostly straight, with just the ending part on the bottom being slightly edged. It’s a great map for simple matches and no annoyances with people refusing to die and coming back too much – which is great for seamless competitive matches.

Apocalypse is a very interesting and specific map that features one carefully planted platform, a small, even surface to fight on, and mostly short edges. It’s great for 1v1 fights where you don’t want to prolong the experience for too long and allows for some interesting strategies with its inclusion of a single platform.

The intensity of the matches is undoubtedly complemented with the chaotic artwork of the map, and a Doomsday clock right below adds to the apocalyptic experience.

Miamo Dome is a rare example where we believe both the normal and the big versions are pretty great in their own ways. The simple version is a very straightforward and fairly short map which allows for a great experience with a few players. That is thanks to its straight surface, two platforms that can be used by multiple players, and straight sides for allowing more edge related gameplay.

Meanwhile, the Big version is, well, bigger. It has the platforms spread out and more space to fight on, making it great for a bigger player count as well. Although it’s less competitive-friendly in comparison to the smaller version since the platforms are so oddly placed that it could cause a lot of chaos – but it’s still pretty fun to try something new at times.

Twilight Grove is a gorgeous map that not many people seem to like due to one reason: the platform on the right side. Due to its placement and specific design, it allows trolls to stay there and try to force more impulsive players to go and fight them. They also often trap people below the platform to easily throw them downwards.

While the ‘Big’ version of the map makes no sense to us since it does not fit competitive or casual play at all in terms of fun – we think Twilight Grove is a fairly fun map that, if not crowded by trolls, can make for some very interesting plays. The platform helps you come back in the match easily, and the platform on the left works similarly as well.

So, to put it simply, if you’re looking for a map that lets you come back in more often – this is it.

The Thundergard Stadium map is popular for two things. One of them is the fact it’s very obviously ripped off from a popular map featured in Super Smash Bros., and the other one is the fact it’s just a good map in general and allows for a large number of players to have fun without frustration.

The small and normal versions are pretty decent too, so it’s really about how many players you want in the match. But the ‘Big’ version is our favorite as it’s one of the largest maps in the game and does not feature any annoying platforms or hindrances towards edge-returns.

Okay, we know you’re going to say it’s not a good map. You know what? We agree with you. But that’s exactly why it’s on the list, hear us out. We all hate the Rainbow Road from Mario Kart with a passion – but there’s a certain appeal to the masochism involved in playing there and permanently destroying our friendships.

That’s the same way Big Titan’s End is good because it’s just so ridiculously frustrating that you will end up hating everyone you loved every time you get knocked out.

Galvin Prime is a map that is often overlooked but is pretty fun when you think about it. It has a fair amount of space to fight on and features two platforms on the left and right sides which help with not falling off too easily. Two platforms in the middle also let you mess around further, so essentially there’s a little bit of something for everyone in this map, and it suits many different playstyles.

It’s definitely not as appealing as some of the other entries in the list, but compared to uneven grounds of troll-friendly platforms, this map is still pretty good.

Now that the maps are all discussed, on a final note, if you’ve noticed – the maps featured mainly don’t have uneven grounds or many platforms. That’s because these are the very factors that can cause an imbalance and provide certain characters advantages over the others due to certain moves and signatures. That’s why pros prefer simpler maps as they allow for fairer competition.

That’s it for our list of the top 10 best Brawlhalla maps to play in! We hope you enjoy some of these and if you think we missed any important maps out, we’d be happy to hear your thoughts.