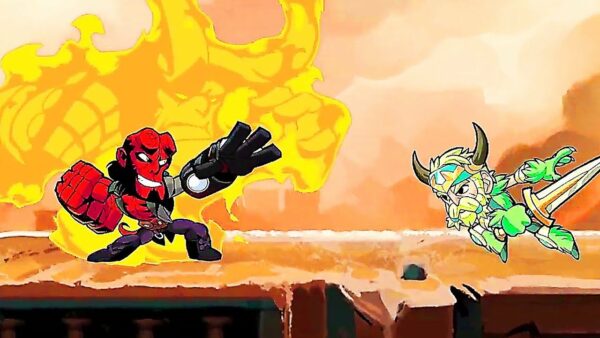 Brawlhalla is a free-to-play fighting game and has 51 unique characters to play as. Having a free-to-play model means that every new character that is introduced in the game is supposed to be the next big deal. Which is to make sure players grind extra hard or pay real money to obtain the new legends.

With Ubisoft as a publisher, it is without a doubt that the developers do try their best to balance the game – but ultimately many legends end up being vastly superiors to the others in competitive and ranked plays. So, if you wish to play the game seriously then you will need to make sure you pick the right characters to play as – and that’s why we’ve created a tier list of the most powerful Brawlhalla legends that you can play as.

This list is based on objective statistics released by the Brawlhalla developers, and community notes that include veteran players with maximum experience – so you can trust its integrity. Without further ado, let’s get right into the list!

Scarlet is known for her unique steampunk-themed design and the powerful Hammer and Rock Lance weapons. She deals a very high amount of damage and is considered a high risk/high reward character by her players due to how powerful her combos are when executed properly. But if you manage to dodge her, she’s also very punishable.

That’s why it’s recommended to play defensively as her and then go all out in the damage when the player gets a great opportunity to attack. There are a couple of tricks that players can learn that are very helpful, such as air canceling her Hammer weapon since it increases her side signature’s attack hitbox. Her signatures with both weapons having neutral properties is also a great advantage that not many characters have.

Teros is a minotaur who uses an Axe and a Hammer as his weapons, and he’s pretty much a brute character that relies on unpredictability along with their aggression. As rather visible through his design and descriptions – he is a highly damaging character that can be extremely difficult to deal with as an enemy.

You shouldn’t be reckless even with this much power, of course, but he’s one of the safer characters when it comes to being punished if you know what you’re doing.

Ulgrim is a dwarf character whose backstory traces back to the Norse mythology itself. His weapons are an Axe and a Rocket Lance, and he’s notable for being one of the few characters that use the Rocket Lance differently from most other legends.

An example of that is the fact his secondary Lance signature does not feature any form of charging whatsoever since the design in his case resembles a drill more.

Orion is a very well-known character in the Brawlhalla community and is known for how easy it is to learn his signature moves and to use them against other players. This caused him to be disliked and become a meme as a result, being nicknamed ‘Yellow Man Bad’ as a simple way of expressing dismay towards him.

A character hated for being too easy to deal damage with? We don’t have to tell you anymore why he’s top tier. And his weapons are Rocket Lance and a Spear, so that’s helpful too.

Sir Roland is one of the most balanced and versatile characters, as he is great for players who wish to have great defensive and offensive options in the same character. He wields a Sword and a Rocket Lance as his weapons, and it changes how he plays based on which weapon is selected at a given time.

With great tools through and through and a rewarding learning experience, Sir Roland is popular in the community and quite beloved. And he has a great beard.

Lord Vraxx is an alien character who uses the Rocket Lance and Blasters as his weapons. While many of the top tier characters so far have been brutes of a sort, this legend is a great exception as he is popular for his ‘zoning’ abilities instead (which means they have great projectiles).

This grants him great mobility as he can keep his enemies at bay while still effectively damaging them, and it is also to clear up crowded spots too. His light kit can often trick enemies into going to the blast zones in matches, and his signature moves are neutrals with both of his weapons too.

Queen Nai is another one of the more known Brawlhalla characters, and part of it is because of her unique design and backstory. The other part is, of course, the fact she’s incredibly powerful and has great stats. She’s one of the most damaging legends but her main quality is her durability.

At the cost of some speed, she can be protected with her strong armor, and her signatures are really good as well with both the Serpent Spear and Sacred Blades weapons. The reason for them to be so good is simple – it’s the fact they’re pretty fast and long-ranged, which lets players mix up other things with the move and also be less vulnerable to punishing.

Jaeyun is one of the more recent characters and was the 50th legend to be added into the game (which has a total of 51 at the moment). His weapons are The Cleaner and The Fisher – which are both swords and thus provide him with the specific theme of a swordsman.

His gameplay is pretty versatile and he can keep his enemies at bay while dealing them great damage at the same time. His defense is pretty solid too, and he’s one of the fastest characters for the amount of damage he can deal compared to the rest of the roster.

Zariel is another character that sacrifices speed for their strength and armor abilities similar to Queen Nai. The speed is of course traded for durability, and based on your playstyle that can be very helpful in difficult situations. Their weapons are a Bow and Gauntlets and it’s pretty fun to mix the two weapons.

Of course, the Bow means that the character has a decent tier of mobility and can keep their enemies at bay most of the time. But a lot of the players prefer the Gauntlets solely for how much fun they are, and the damage they deal is great too. An important note though is that Zariel is A-tier on the list, not S.

Gnash is regarded as one of the very first human beings from the place that he comes from, essentially being a homo-sapien that is not evolved like most other characters in the game. His strength and speed are top-notch as both sit at 7 points and armor is alright too. What he loses is his Dexterity – which can be bad for some players but fine for the rest.

So, it’s really just about what’s important to you when it comes to picking your character. He uses a Hammer and a Spear as weapons and like Zariel, he is A-tier on the list instead of S like everyone else.

Now that we have the very best characters out of the way, here’s a complete tier list that includes every Brawlhalla character in one place:

A little bit of explanation for these lists is that the S tier consists of legends that dominate the game. They have all the important tools that they need to be top of the game and are extremely advantageous when you manage to master them.

The A tier means that the characters are very good and barely have any drawbacks, but they might be a bit held back due to some notable disadvantages when matched up with the S tiers.

The B tier characters are above-average and fairly decent legends to have by your side, but you will struggle a bit with them if a pro is using S tier legends against you.

The C tier of legends is the bottom of the barrel. If you just started playing the game and don’t have anyone else – you should invest a little bit of time into them and quickly move onto a different legend. With the right amount of time and effort, you might get a few wins with them – but it’s ultimately not worth your time as they will fall short against pro players.

The D tier is the worst you can possibly end up with. Even playing them temporarily while you find other legends can be a chore in ranked games, so we don’t recommend investing any time into them even to unlock other characters. Just use them in casual matches to mess around with and get a character from any other tier immediately.

That’s it for our list of the top 10 Brawlhalla characters on the tier list, and we hope you found the legend that suits you best here! If you have any questions, feel free to let us know, and make sure to check out some of the other helpful articles on our website.

Keep in mind that having an S tier character does not automatically guarantee victory and someone from a lower-tier but a high level of skill can still end up winning too. It’s just something that you should know about anyway and helps you understand the characters better.