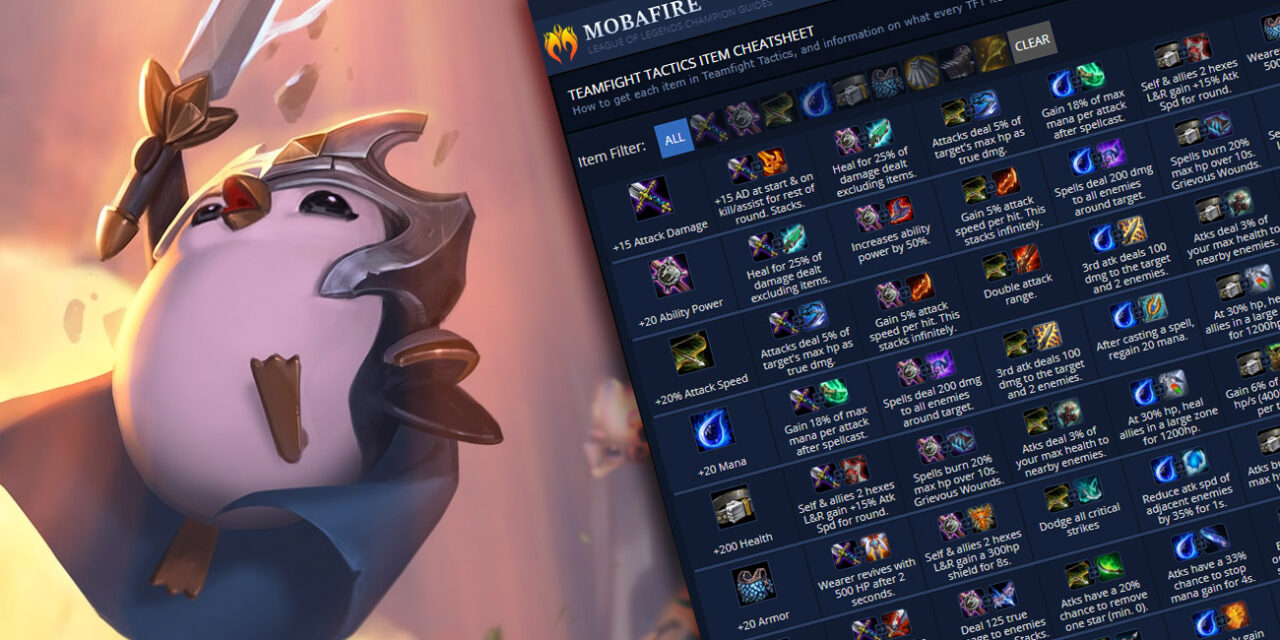 Hello summoners, welcome back to another guide on the TFT item tier list. Today will be going to talk about all the items in the current season and dive right into their stats. This will help you figure out what items to build on what TFT champions and bring the most enjoyment out of your games.

TFT has been known to be e out of balance for quite a while now. But with the recent item change, it is as balanced as it has ever been before.  with so many recent changes on the items,  we don’t want you to get overwhelmed without knowing what to build and what units.

With this recent change,  the tanks are going crazy but the assassins are also diving in in the backline to one-shot the squishy champions. And let’s not forget about the overpowered mages that can change the base of the game in the blink of a second.

So keeping all of that in mind today will be going to give you the item tier list for set 4. Even though a lot of the items are going to face more changes along the way,  from this guide you will know which items are instantly usable. So you can climb the ladder of the rank system in no time.

So, without any further ado, let us dive right in and check it out.

Just like the previous set 3,  items can play a  massive role in the overall gameplay. But the great news is that the items are not as unbending as they wear in the previous season or patches. That means you will have a lot of flexibility on the items and gameplay.

And as every page comes and goes,  we will always have new things to discover on the best item in TFT. but following at the current best in the game.

The key thing to note is that we purposefully excluded The Spiritual items for the integrity and comparison between the usual items. So you will have a better understanding of the overall items and can easily Smash them on your suitable unit.

The S tier of items is chosen specifically due to their ability to be versatile and used on multiple compositions. Some of them are downright overpowered due to their incomparable stat. And to start things off let’s talk about the sun fire cape.

This item is unbelievably ridiculous at this moment. And even though the item has seen quite a few nerves on the recent patch it is Still Giga broken.

Even though it is not exceptionally overpowered in the later stages of the game,  it can push through the early stages with extreme ease. The item is really strong on Champions like geren or tahm kench.

With the cape, they become unkillable at the early games. And if you are trying to play moonlight and have a Diana,  this item will be great for her. As she already has built-in AOE damage, the Sunfire cape will give her the extra boost to melt enemy units.

Next up on the list is the quicksilver item. If we talk about the item tier list tft, this is a must mention item. This item got a massive buff in set 4.  and that but made the quicksilver a dominating item on the S tier.

With the buff, the item lasts a lot longer than it did before. The amount of cc it prevents is an absolute necessity in this new season. In the set for their many champions in the game like Nami and Wookong in the early games. You will also have to face Aatrox and seujunai.

That means if you want to move your carry and cause damage to the enemy units the quicksilver item is a Must.

And if it doesn’t your carrier will not be carrying anything throughout the whole game.  As they say, defense is the best offense. The great thing about this item is that it can be put to use on any kind of composition on any kind of carry. You can also use the item on Front line tanks,  as it will help them observe much more damage for your carry units.

But make sure to not use the item on Champions like the talon.  because it’s much more healing than prevention from crowd control.

Now it is time to talk about our damage and carry an item that is  Giga broken. And it is not anything other than the Infinity edge.

Even though after the change Infinity edge has lost some of its damage from the critical chance,  it still offers a great scaling of add-on carry champions. The item works based on Champions like Ashe,  Jhin, Zed, Talon, and Warwick.

This is a very powerful item to use that can provide pure scaling and stably increase the damage over time.

No TFT item Tier list is complete without mentioning the stone play on the S tier list. The items open up a dimension to the gameplay and lets you use a single unit frontline without any issues at all.

With the item, you can just use a single front liner to soak up all the damage and have a full backline of healer support and carry to win you most of your games. And if you are playing a late-game kayn, this item is downright monstrous.

But know that, quicksilver and Sunfire might give more stat in the early stage of the game. So make sure to be wary of this tier list and try to make the stone plate at the later part of the game for its full potential.

To start things off in the A tier, the shroud of stillness is our main focus.

The item is a great way to punish carry units that are positioned badly. And the added dodge on this item makes it one of the best items in TFT for a frontline unit.

The whole game of TFT revolves around a cast of spells. And the shroud does just that and gives you the massive advantage by letting you cast the first damage.

Even though This item lost to Quicksilver, it is still among the best items on today’s best Item Tier list. This item makes the mid-game extremely safe to play. The passive lets you get away with quite a few mistakes on each round.

And if you are opting to play talon, Kennen, or riven as your team’s main carry, there is no better option than this item. With guardian angel, your units will be able to dive in the backline, kill enemy units, and not get punished for it.

And if you gave a unit that has a relatively high impactful ultimate, then guardian angel will be a great choice for them.

Another good item under The A tire list is the morello.

With this item, some of the units in the set 4 tft become broken. The stats the item provides are also superior to any other major item on the tier list. For instance, iralia has a massive aoa,  which makes her a perfect user for this item.

It is the same as the last season as the gangplank was a very good champion to use this item on. This item is not efficient on the unit that has one shot potential; it is more dependent on the area effects and provides a good burst for longer periods.

To finish off this list we have the Giant Slayer. This is a well-rounded and very good offensive item that can be used on almost any carry champion. Giant Slayer is a very good item to cut through the HP  and provide your team with a better sense of victory.

It goes very well with units that have built-in attack speeds like Ashe or Jinx. the faster you can dual damage with Giant Slayer the more HP will be able to cut from the enemy front line and the black line. Halki chose to note that Giant Slayer works with spells also so you can also use this on spellcaster users not only auto-attack champions.

Now we have come down to the B tier on today’s list of best Item Tier list Tft. The items we will be going to discuss right now and not exceptionally overpowered but not bad as well. They provide average statistics and can be put to good use if placed correctly.

Bramble vest is an item that is untouched by the Riot game developer throughout the tft season. It is one of the best items for defensive purposes. So you can quite easily eat food on any front-lining champion and get the most potential out of them.

In the current season, there are many magic damage dealing units and so many magic items. so to counter all that you can use Dragon claw on any front-lining champion like Geren.

This will pretty much make him vegetable and unkillable for the early stage of the game.  even the item Falls off in the mid-game,  it comes back up at the late game when incorporated with other powerful items.

This has always been a very solid item for almost any of the champions. Even though it is an RNG or coin flip item it can change the title of the game in a matter of seconds. It provides a significant amount of dodge chance to be used on the front line in Champions. And if you are playing an extremely impactful Champion that can work with almost any items in the game then this will be a great option for them.

That ends our today’s discussion on the TFT item Tier list. There are some other items that we have left for you to try out ourselves. But these are the best items in 2021. And this is why they are included in the best item tier list.

Now, all there is left for you to do is follow the tier list and abuse them in-game, before they get nerfed to the ground.